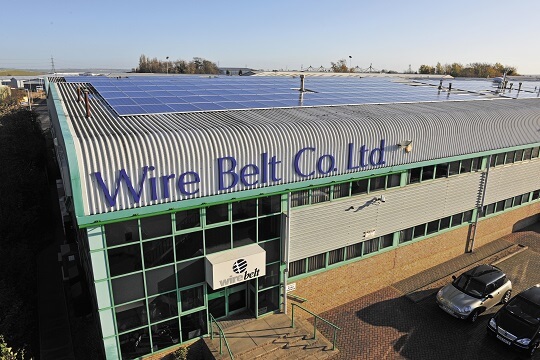 Metal conveyor belts by their very nature have a finite life.  “How long should this belt last?” is a common question asked of conveyor belt manufacturers. The factors that affect belt life can often be confusing and hard to control. Some of these factors are inherent in the materials and design of the belt, while others involve the specific application. By gaining an understanding of how belts fail, people working with metal conveyor belts can take steps to optimise belt life.

Much of current practice regarding metal conveyor belts is based on an intuitive approach, rather than on the rigorous methodology of current engineering understanding.  The subject is clouded in ill-defined jargon and misperceptions. The purpose of this paper therefore is to define and clarify the language used in the conveyor belt industry, and to apply this language to an explanation of the failure mechanisms which affect belt life.

Definitions can cause confusion

Engineers use terms that have very explicit definitions that help them to communicate with each other.  Often, non-engineers misunderstand this language because they are unaware of the body of understanding behind the words. To make matters worse, this engineering language commonly makes use of everyday words.

For example, to the lay person, the word ‘speed’ means ‘how fast something is going’. But to the engineer, ‘speed’ is the ‘magnitude of the time differential of position’.  Definitions that must be understood before belt life can be discussed are found in the box below ‘Definitions of Terms’.

Metal conveyor belts are subject to three primary failure mechanisms: Yield, Fatigue and Wear. A belt in a typical application may experience one or any combination of these mechanisms. When they do operate in combination, it is often difficult to try to isolate a single cause for failure. The remainder of this paper looks at each of the three failure mechanisms individually, while knowing that in actual practice two or more may be operating concurrently.

Yield occurs when an object has been loaded to the point where it no longer has the ability to return to its original shape. If a metal conveyor belt is deformed to the point where it no longer fulfils the function for which it was designed, it has failed. While a belt usually breaks shortly after the start of yield, it does not, however, have to break to be considered ‘failed’.

Yield failure is the most common and easily avoided failure mechanism in metal conveyor belts. It occurs due to accidents, overloading, mis-installation, or mis-application. It is imperative to follow the manufacturer’s recommendations for loading. When selecting a metal conveyor belt, it is advisable to pick one with a high UTS or tensile. This is because, in most ductile materials (metals), there is a direct correlation between the ultimate tensile strength and the yield strength. (See Figure A).

One of the common misconceptions in the conveyor belt industry is that harder belts become brittle.  While it is generally accepted that harder materials are more brittle, conveyor belts are seldom, if ever, subject to high impacts. The process which increases the tensile strength of metal also increases its hardness, and increased strength is a desirable characteristic. What is often thought of as ‘brittle belt failure’ is most probably fatigue failure instead.

It is commonly believed that as metal conveyor belts are used, they become brittle. A similar mistake was made in the early 1800’s with railway axles. William Rankine, an eminent Scottish engineer and thermodynamicist, postulated that the cause of brittle-like failure in these axles was due to recrystallisation of the material from fluctuating loading. The brittle appearance of the failure led him, and others, to speculate that the material had somehow changed and become ‘tired’ or ‘fatigued’. Even when it was later shown by August Wohler, a German engineer, (around 1870) that the broken axle halves were as strong and ductile as the original material, the term ‘fatigue’ stuck.

Fatigue occurs when an object is subject to a time varying load, called cyclic loading, which includes some component of tension (See Figure B). The phenomenon starts where some small, often microscopic, inclusion creates a localised zone of increased stress, due to a decrease in cross-sectional area. This is called a stress concentrator. During the tension phase of cyclic loading, this stress concentrator can act as a site to begin crack propagation (called inception). In subsequent cycles, the crack will grow progressively larger, until the local cross-sectional area is decreased sufficiently that the stress exceeds the ultimate strength of the material and it fractures.

At a macroscopic level (without magnification) this fracture appears to be what one would expect to see in a brittle material. This is the source of much of the confusion between ‘embrittlement’ and ‘fatigue’.  However, at a microscopic level, one can observe striations (concentric bands) in the fracture surface, which are indicative of crack propagation from the inception point (See Figure C).

Cyclic loading in a conveyor system can come from many sources. The repeated pull and release which constitutes cyclic loading can be produced by any or all of the following: the infeed and discharge of product; the change in direction caused by end rolls and nose bars; the tension of the catenary sage. These issues can be addressed in the design of the conveyor system by reducing the number of turns in the circuit, increasing the diameter of these turns and minimising the overall tension in the belt.

However, once the belt is in service, about all that can be expected to be gained from an understanding of fatigue, is that belt life can be very predictable. Currently this predictability has to be based on experience. Reasons for deviations in belt life for a given application are therefore due to installation, use and materials.

In a situation where cyclic loading occurs, there is a relationship between the magnitude of the load and the number of cycles that the object can be subjected to before failure (See Figure D). Some materials, including those commonly used to manufacture metal conveyor belts, exhibit what is known as an endurance limit. The endurance limit is defined as the level of stress under which the number of cycles can, in theory, be infinite. In practice, no dynamic machine can be designed that will have infinite life because of wear, corrosion and other phenomenon. Even if a conveyor belt is designed within the endurance limit, it will eventually wear down to a point where fatigue is imminent.

Wear is an erosion of material which occurs whenever there is a relative motion between two contacting surfaces. Two varieties occur in metal conveyor belts: Abrasive Wear and Adhesive Wear.

Abrasive wear occurs when a harder material removes portions of a softer material. In metal conveyor belts, this wear is due to external factors, such as a misaligned belt rubbing against some portion of the conveyor equipment. Abrasive wear is evident when a belt starts to cut its way into a piece of equipment or vice versa. This is usually an undesirable effect; however, it may be used advantageously. Wear strips ensure that the sacrificial material is abraded, rather than the more expensive belt. Care must be taken to assure that hard foreign objects do not become embedded in the softer wear strip material, thereby abrading the belt.

Adhesive wear occurs when two pieces of material that are chemically compatible fuse to each other and are ripped apart by their relative motion. (See Figure E). This phenomenon is usually internal, when it applies to metal conveyor belts. As the joints in the belt articulate (or hinge), asperities (uneven areas) in the two surfaces actually weld together due to their similar chemical makeup. The process, known as ‘friction welding’ produces a ‘weldment’ that is actually stronger than the cohesive strength of the base metal. Therefore, as the two surfaces move relative to each other, this weldment breaks away and forms a particulate (or microscopic fragment). This particulate can be many times harder than the original belt material and if not removed can lead to abrasive wear. Proper cleaning and, if possible, lubrication of the belt will significantly reduce wear and the build-up of particulates, seen as black residue.

By carefully looking for these three failure mechanisms and by understanding the factors that contribute to them, belt life can be greatly increased.  Proper selection, installation, usage and maintenance of metal conveyor belts will pay off in a substantial reduction of unscheduled down time.